The administrative and pharmaceutical production facility of VULM SK Bratislava.

In 2013, we installed, put into service and launched the instrumentation and control system in the administrative and pharmaceutical production building of VULM SK Bratislava.

As the building serves as a cleanroom pharmaceutical and dietary supplements production facility, the system implementation required a highly demanding and technically precise assembly and launch.

The production facility is divided into several sections and each has different working conditions.  We implemented the instrumentation and control system for seven HVAC units (from 3,000 to 25,000 m3 / h) and two gas boiler rooms (sources).

The control system works on a dispatch basis through the webserver application storing the measured values. 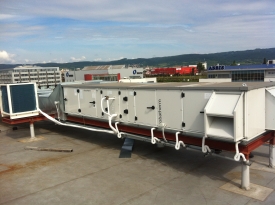